Channel and pavé settings are two popular styles often chosen for engagement and wedding rings. They are beautiful and versatile elements that can be used to complement a range of ring styles. Both settings feature rows of small diamonds or gemstones that run along the shank of the band. When viewed from a distance they look very similar, but they are two very different applications. 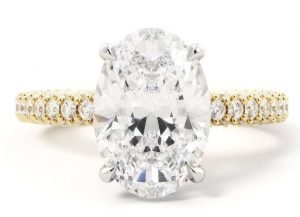 Pavé (pronounced pah-vay) from the French word for “paving,” is a setting where several small diamonds or gemstones are packed closely together, creating a field of sparkle and accentuating the main stone. The stones are usually so closely set that the metal beneath them can’t be seen and the band appears to be ‘paved’ with gems. There are a few different types of pavé settings where the stones sit on the top of the band and are held in place by tiny prongs or beads.

Petite pavé uses smaller prongs allowing more diamonds to be seen. Micro pavé takes it to a tinier level creating a seamless and brilliant look, which makes jewelry appear to be entirely made out of diamonds. U-cut pavé’s name comes from the shape of the grooves into which the diamonds are set which gives it a wavy appearance and uses less metal creating more sparkle. Similarly, French pavé features v-shaped grooves that add an intricate textured element.

One of the biggest benefits of a pavé setting is that you get more sparkle for less money. Pavé settings give the illusion that the diamonds and gemstones are more plentiful and bigger, and also allows for the center stone to be highlighted. This is one of the most brilliant options for a ring, especially when coupled with a halo setting, but is versatile and works beautifully with both modern and vintage style rings. It is however a more delicate setting.

As the name suggests, a channel setting features a “channel” of gemstones within the band. The stones are nestled against one another and not separated by prongs, beads or bezels. This type of setting adds a beautiful prong-free touch of sparkle to an engagement ring, and because the stones are recessed and held by the lips of the channel, it’s very unlikely they will fall out or come loose.

Since the stones are securely embedded within the channel, it’s very secure and unlikely to get caught or snagged since it’s free of prongs. The gemstones are typically identical in shape and are set either just below or flush with the band. While round diamonds are the most popular option for channel settings, square or rectangular shapes like the princess, baguette or emerald cuts leave no gaps and spaces within the groove, creating a smooth, continuous pavement of stones.

Of the two settings, the channel setting offers more security with more subdued sparkle. Because light interaction with pavé settings is higher, they are more brilliant and dazzling, can make the center diamond appear larger and enhance its sparkle. Whether you’re looking to design a custom ring with a little extra sparkle, or have questions we’re here to help! Give us a call at 303-385-8449 or click here to schedule an appointment!