Popular as both engagement and anniversary rings, a three-stone ring features three stones that traditionally represent friendship, love and fidelity, or past, present and future. Let’s learn more about this type of ring, how to wear it and some of our favorite trinity styles.

Also called a trinity or trilogy ring, three-stone rings are full of symbolism, most traditionally representing a couple’s past, present and future. In this setting the center stone is always the biggest representing the present, with smaller stones sitting on either side representing the past and the future. Others use such a ring to represent a three year anniversary.

A more modern interpretation of three stone rings views the center stone as a representation of friendship, love and fidelity, the three building blocks of a strong relationship. This style is also known as a trilogy ring because they can also represent the Holy Trinity. Per this symbolism the three stones would represent the Father, the Son and the Holy Spirit. There are so many meanings to this style ring!

The traditional styles of the trinity include graduated, slightly graduated and equal size, usually all diamond stones. Equals contain stones equal in carat weight while in a gradual the center stone weighs the equivalent of the two diamonds. All three stones can be diamonds or you could include other stones you find beautiful or meaningful like birthstones.

To make your ring stand out even more, consider mixing different shapes like an emerald cut center stone with a pair of side baguettes or a round cut center stone with a pair of pear-shaped side stones. Another option that is popular is the three stone halo engagement ring which also gives the appearance of having a bigger stone. The sky’s the limit when it comes to creating beautiful and meaningful three stone combinations. 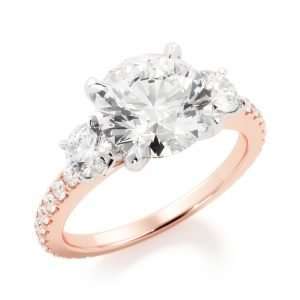 Our Classic Three Stone Engagement Ring features a round diamond center stone accompanied by two side round diamonds that appear to be floating above the band with delicate micro pavé set diamonds ¾ around it. 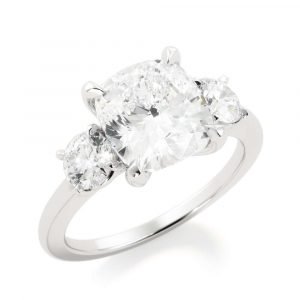 Whether you’re interested in a custom three stone engagement ring or a more classic one, this style is always a lovely choice thanks to its deep meaning. Let us help you create the perfect custom piece of jewelry. Give us a call at 303-385-8449 or click here to schedule your appointment!