Last week it was finally confirmed that the quiet relationship between Samantha Steele and Christian Ponder was more much more serious than anyone knew about.  The two confirmed not only they are in a relationship but they are engaged!

The two have only been dating a short time according to sources, but are very excited about their relationship and impending nuptials.  So how did the football quarterback propose to probably the most beautiful ESPN reporter?  With none other than Christmas lights.  That’s right!  Ponder reportedly spelled out “Marry Me” with Christmas likes and then got down on one knee with one large beauty of a ring.

Despite the sadness of many Vikings fans, since Christian Ponder has performed poorly on the field this year, he did extremely well in the jewelry department!  The ring contains a cushion cut center white diamond that is approximately 4-carats in size.  It is surrounded by not one but two halos.  The first contains pink diamonds, the second large white diamonds.  The band is also quite large contains diamonds all the way down either side.  The ring is probably close to almost 5 or 6-carats total weight.  Many have speculated that the engagement ring looks something like a super bowl ring…maybe Ponder was thinking positively about the Vikings future success. 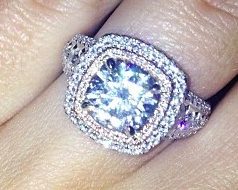 The Diamond Reserve wishes all the best to the happy couple and can’t wait to see what their wedding bands look like!   If you would like a ring like this contact us today for an appointment!