Not only did newly married Kate Winslet get an awesome last name when she married Ned Rocknroll, but she also got a killer ring to go with her new life.  The star married Ned, born Abel Smith, nephew of billionaire Sir Richard Branson, yes the owner of Virgin Galactic in December.  The news was quietly confirmed by Kate’ rep, after news leaked of the small ceremony in New York City.  Apparently the two had been engaged for almost 6 months, but the star made a conscious effort to not wear her ring to public events in order to avoid the media scrutiny.

The wedding which was Kate’s third and Ned’s second, involved her two children and a small group of close friends and family.  It was reported that Kate was actually walked down the aisle by close friend Leonardo DiCaprio.  The ring remained to be unseen though until Kate stepped out last week in England to do some grocery shopping.  Sure enough she was spotted wearing a yellow gold ring with a noticeably large stone attached to it.  The details of the ring are extremely difficult to make out from the picture, but it does look like Kate either has a large yellow gold band with a solitary diamond or an engagement ring and wedding band both in yellow gold.  There may also be some pave diamonds surrounding the bands, but once again it is hard to make that out. 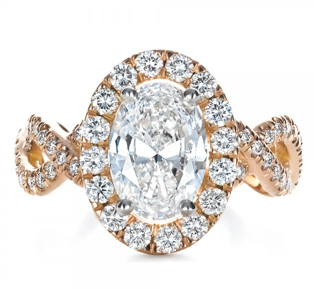 The Diamond Reserve hopes that soon Kate decides to show off that ring of hers so we can all see how amazing this ring really is!