The Diamond Reserve | The Pope's Jewelry
Skip to content
EducationJewelry

With the recent election of a new Pope, the leader of the Roman Catholic Church, we thought it might be interesting to learn a little more about the jewelry that this man wears.  The jewelry typically changes each time a new Pope is elected, each bringing their own unique personality and taste to the usual pieces.

The most common piece and often the easiest to spot is the large cross that is typically worn over the Pope’s robes.  The other common piece seen is a ring that the pope typically wears on his right hand.  Although these two pieces are what are most commonly seen, the Vatican is known for having a large collection of not only jewelry but priceless valuables as well.

A great story we found about one Pope’s jewelry, Pope Paul VI’s jewelry was recently placed on eBay for auction in April 2011.  I know what you’re thinking, how could a regular person have access to these pieces and simply auction them off.  Well, it turns out that the Pope actually donated the pieces to the UN during a visit in 1965, in which he told them to auction off the 12.75-carat diamond solitaire ring and the 60-carat total weight cross that includes more diamonds and emeralds, to raise money for charity.

We are interested to see what the new Pope, Pope Francis I, will wear when he begins his outings and excursions all over the world.  The Diamond Reserve 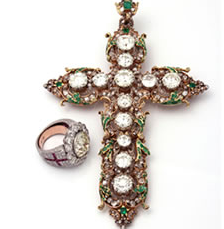 certainly can’t wait to see more of those stunning crosses and rings that only jewelers from The Vatican could design.