When Charles popped the question at a private dinner at Buckingham Palace, Princess Diana couldn’t help but laugh. For what reason you may ask? He proposed without an engagement ring! In addition, he did not even get down on one knee. Regardless, the princess responded saying “Yes, Please!”.

Rather than selecting the ring prior, Charles let Diana pick her own ring from a selection of different designs by Garrard, a crown jeweler at the time. From all the options provided, Diana’s selection was the root of the unconfirmed controversy behind the princesses’ famous ring. When a young Princess Diana was presented a lineup of precious gems designed solely for royalty, she opted for the one item that was also available to the general public (assuming they had the estimated $60,000 to dish out for it) rather than selecting something no one else could have.

Diana’s heart was set on a 12-Carat Oval Ceylon Sapphire surrounded by 14 diamonds, all encompassed by an 18-karat white gold band which was later called the Marguerite Ring. This scenario is famously reenacted in season four of the Netflix show, The Crown. Is this reenactment an accurate depiction of what truly went down? Or was a lot of what happened all for dramatic effect? We are here to uncover the differences.

In episode three of season four in the Netflix series with a title of “Fairytale”, Diana first selects a Burmese Ruby ring that was a royal family heirloom piece. These are presented to Diana by the Queen in a “special box of chocolates” that was actually a selection of engagement rings curated by William Summers. The Queen announces the variety of ring options but follows up by saying “anyway, the idea is that you pick one”. Diana then changes her mind, and according to the show, picks out the largest and most expensive item.

When asked by Queen Elizabeth why she liked that one more, Diana responds by saying “Because it reminds me of my mother’s engagement ring and it’s the same color as my eyes”. The tension in the room is very evident, but we cannot allude it to the fact that it was the priciest item as the royal family would not have worried about the cost associated, assuringly. According to Royal Secrets: The View From Downstairs by Stephen Barry, in real life, the queen’s eyes may have popped when Diana selected the largest option. In episode four where the decision making took place, the Queen’s eyebrows were noticeably raised at the choice. Whether her eyes popped due to the price tag, or the fact that it was available to general “commoners” for sale, we will never truly know the thoughts that took place in her mind at this given moment.

In the show, the scene was shot at the Heaven Room at Burghley House, whereas the real-life ring selection took place at Windsor Castle in February 1981. This is one of the main differences between the Netflix series and the actuality of the engagement ring selection and where it took place. On the contrary, what is accurate is the fact that she was presented a lineup of potential rings to select from. What may or may not have been approved by the royal family (the controversy is not 100% confirmed) is now the most famous engagement ring in history and increased the sale of sapphires by 300% for the few months after the ring was later passed to Kate Middleton, the Duchess of Cambridge.

Regardless of what went down in real life versus Hollywood, Sapphire is such a beautiful gemstone and can easily be incorporated in day to day fashion wear, or even your engagement ring. As mentioned in our blog on Custom-Made Sapphire Rings, Sapphire symbolizes loyalty, trust and faithfulness which adds even more underlying meaning to a piece of jewelry that is already incredibly special. 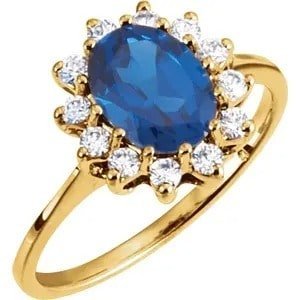 If you’d like to channel your inner Princess-Diana and make your sapphire dreams come true, give us a call at 303-385-8449 or click here to schedule your appointment!