Morgan sat down and gave us all the inside details of her relationship with Ben and the ring that was sized perfectly for her.

We met through a mutual friend who was actually dating Ben’s roommate at the time. We tried planning a double date at the beginning of the week, but it fell through because his roommate got sick. I was not even wanting to go on a date in the first place so there was no way I was going to meet Ben without my friend. I tried to back out many times and my friend talked me into going out with them on a Friday night after church.

As much as this went against my “life” and “mindset” at the time I knew as soon as we locked eyes. It sounds cheesy as heck, but I even told my friend that night that there was just something special about Ben and I knew he would be the one. It was the craziest feeling and the entire night was unlike anything I expected. I went in meeting him without any expectations and I think that is why I knew immediately.

Well…to start off, I was completely surprised and had ZERO idea this was all going down. Ben wanted to go hiking and I woke up that day a little hungover from a fun night before with my sister and our roommate. We celebrated our roommates birthday with a brunch that Ben made (he was up at 7am chipper as ever) and we had brunch around 10am because I couldn’t get out of bed because I did not feel good. We had brunch, sang happy birthday, and our roommate went to “meet his parents” and my sister “drove down to Pueblo to help her friend wedding plan”. I finally peeled myself off the patio couch and got ready for the hike…threw on a hat, put my hair in a ponytail, and didn’t put a lick of makeup on.

He told me we were going to hike Mt. Herman which we had hiked about a year prior. We also love driving the jeep all around that mountain so we have had many fun memories on that mountain. When we got to the trailhead he asked me if I wanted to just drive around the mountain or do the hike (praying I would say do the hike) because on the way up the mountain I was not feeling too hot. I decided to do the hike which took us about 45 minutes to get to the top.

Once we reached the top he wanted to keep walking towards the flattest spot so we could take a selfie because we always take a selfie after every hike we go on…at this point I was over the hike and ready to go down, but kept doing what he wanted. We got to the flat spot and took a couple selfies and as I started to turn around to start walking back down the mountain he grabbed me and hugged me and told me he loved me…he did this twice. Then he pulled out the ring and I immediately threw my phone and covered my face and turned around and screamed (he said I ran off, I didn’t run that far).

He grabbed me and said, “Can you get back over here so I can get down on one knee?” He asked me to marry him and of course I said yes and about had a heart attack when I saw the ring. I helped him put the ring on and had to ask if he was sure because I was so surprised. Through tears and laughs we hugged and kissed at the top of Mt. Herman. He told me to “look up” and I saw my sister and our roommate at the top of the hill as they were able to capture the moment. They had beer and fireball shots waiting for us! They came down and we cheers’d and took pics and just took the entire moment in. We all walked down the mountain, beer in hand, and headed for what I thought was the brewery to celebrate with just us four. Little did I know, Ben had all of our family waiting at the bottom at the first trailhead with champagne and balloons! The day couldn’t have been any better. I am so glad I was caught completely off guard. 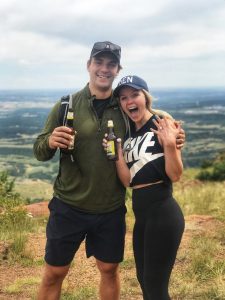 The ring is EXACTLY what I wanted and looks incredible on my little hands. I have tiny hands and Ben did great working with Kaeleigh on creating the perfect look. He told me all about the grade of the diamond and the process of picking it out which made the customization of it even more special. The double halo with the single band has me in complete awe and I literally cannot stop looking at the diamond in the center. I have been getting countless compliments from strangers and I know he loves hearing the compliments as well.