This time we sat with Kaleigh and Brian who talked about their magnetic attraction, a surprise song and their gorgeous three-stone engagement ring.

Brian and I met through a leadership group at the local church we were both involved in. It was a smaller group, and I (Kaleigh) knew everyone in the room there except Brian. After we introduced ourselves that night, it seemed that we would always find each other in a room and ending up talking or sitting next to each other. It wasn’t hard to realize that there was definitely a strong connection between us.

I knew Brian was the man I was going to marry on September 8, 2018! His sister and brother-in-law were visiting from St. Louis and we had decided to go up for a hike. It sounds really cheesy, but on the way back down the mountain, Brian was walking in front of the group and at one point he reached back to grab my hand as we walked. It was at that moment that I just got this overwhelming feeling of “I can follow this man for the rest of my life.” Later on that night, I thought to myself ” I want to marry this guy.” I didn’t tell him that night, but I knew that he was the one!

First of all, Brian did SUCH a great job of surprising me!! Because we had gone to meet Kaeleigh together and design our engagement ring, I knew the proposal would be coming soon. I honestly thought that I would see it coming. Little did I know he had some tricks up his sleeve! On July 3rd, I went down to meet a girlfriend for dinner at Chick-Fil-A. I had been cleaning before I met her, so I was wearing some worn out jeans and a gross tank top with my hair up in a messy bun. After I left dinner, I sent Brian a text to let him know I was on my way home. He told me that he was out with some friends, but he would be home shortly. When I got there, the door to the entry from the garage was locked (which was strange) and I could hear some music, but had assumed that it was the neighbors. When I got inside and walked up the stairs to the living room, Brian had the place decked out in candles and hue lights and he had set-up his music gear and was playing a song by one of our favorite bands. He started singing to me, and my heart was POUNDING. I think I knew in that moment what was happening, but I was so surprised and shocked. After he finished singing, he got down on one knee and proposed. To be completely honest, I can’t even remember what he said because my mind was going in a million different directions, but of course I said yes! We stood in the living room and cried for about 15 minutes (all while I kept saying “oh my gosh!” and “we’re engaged!!” a million times). Then we went up to the rooftop patio, popped some champagne, and facetimed our family. Brian told NO ONE that he was proposing that night because he didn’t want anyone to ruin the surprise. We got to spend that night just soaking up the moment and letting it all sink in with just the two of us. It was intimate and absolutely perfect. 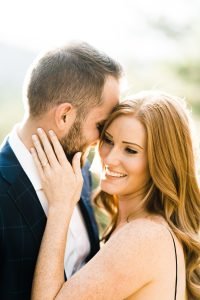 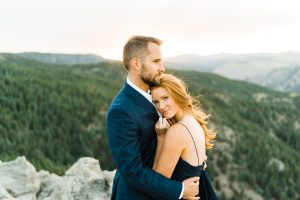 I always knew I wanted a three-stone engagement ring. There was something so classy about them, and I honestly don’t see many of them so I thought they were pretty unique! When Brian and I went to meet with Kaeleigh and see some different diamond shapes, we ended up choosing a radiant center stone and two marquis side diamonds. Originally, the side diamonds were going to be from a ring that Brian’s grandmother had given to him. Unfortunately, once we chose the center stone and the ring was set, the original marquis diamonds weren’t the identical size and the color was off from the center stone. The team at The Diamond Reserve was great in helping Brian find matching side stones to replace the original diamonds, and then the ring was perfect. Working with Kaeleigh was also so easy and so fun! I never thought that I would be a part of the ring process before getting engaged, but I’m so glad Brian and I did it together. Not only was it such an exciting experience, but we also created a ring that we both loved! I look at it all the time and I’m just obsessed!!