In this story we’ll take a look at Justin & Kimberly and why you should always attend your college orientation.

Justin and I met during orientation in law school! I saw him in the parking lot after the first day, taking off his suit jacket and chatting with a friend before getting into his car. I immediately turned to my friend, and coincidentally apartment neighbor, and said, “who is that?!” She replied and said, “Oh, that’s Justin! He’ll be at my party tonight!” I obviously attended that party and the rest is history…

I knew immediately that Justin was the one. From the jump, he was good looking, smart, and funny; he was the eventual President of the Student Bar Association so he was outgoing, energetic, and always the life of the party but in private he also opened up to me in a way that was unique to our relationship. I knew he was different than any man I’d ever met and I knew he was the man I wanted to spend the rest of my life with.

Justin went above and beyond planning for weeks to put together the most incredible proposal that I never saw coming! I am always dragging Justin to work events that he never asks a single question about, except where should I be and at what time? So when Justin asked me, for the first time, to go to a work event with him, I immediately jumped at the opportunity to support him, no questions asked, the way he always supports me.

He told me we needed to be at The Palm at 7 PM on August 2nd, where we’d meet his colleagues for a drink. He put it on the calendar and didn’t really mention it much after that until the week of the “event.”

That wasn’t the only seed he planted weeks in advance. He also started ordering Uber Blacks randomly to pick me up from work or to go run an errand or to go out on a causal date so that when he ordered a nice car the evening of August 2nd, I didn’t even think twice about it. When I casually mentioned wanting to go to the salon to get my nails done the weekend before August 2nd, Justin was all too coyly encouraging because he knew how important it was to me to have my nails done.

He hired a photographer so that we could have an intimate engagement just the two of us but we could also share our engagement with our family and friends back home. He also coordinated with my parents to come from Wisconsin two days after our engagement to celebrate with us for the weekend!

And that’s just all the preparation…on the day of August 2nd, I came home from work to find Justin cooking Chicken Fettuccine Alfredo for us for dinner, which was the very first meal he ever made for us back in law school. After we ate a romantic dinner together, we were picked up by a black Escalade for “the work event.”

The driver dropped us off in front of The Clocktower on 16th Street in downtown Denver, which is directly in front of The Palm. As I walked around The Clocktower to go to The Palm, Justin grabbed for the gold plated doors of The Clocktower and asked if I wanted to check it out. The Clocktower had been our favorite building in Denver since we first visited the city before we ever even moved here. I thought there was no way we’d be able to get past the vestibule and I knew we’d be late to meet Justin’s colleagues but I would follow him anywhere so I said, “why not?” and walked in the door he was holding open.

I walked in and saw that the stairs were blocked off and started to say, as I turned around, “it looks like everything is all blocked off…” when I noticed Justin speaking with a woman who seemed to work there. Before I knew it, Justin was motioning for the elevator and saying the mysterious woman was going to show us around. We took the elevator all the way to the highest floor and when the doors opened, Justin said to me, “go ahead, babe.”

Confused, not knowing where I was going, and expressing all of this audibly, and I’m sure in my facial expressions and furrowed brow, I walked out of the elevator, and up a black winding spiral staircase. Once I reached the top of the winding staircase and turned the corner onto the next floor, I saw red rose petals lining the floor, leading to the center of the Clocktower, where as the sun set through the clock, there was a bottle of champagne chilling, chocolate covered strawberries on a romantic table set for two, and Frank Sinatra, “The Way You Look Tonight” playing.

In a haze of awe and complete bliss, I turned to Justin, who got down on one knee and barely got the words out of his mouth asking me to marry him before I flung myself into his arms screaming yes. He put the ring on my finger and I just gazed at its beauty in a daze of joy.

It was perfect, just like my then fiancé, and now husband. It wasn’t until he slid the ring off my finger and casually put it on the box for the photographer to take a picture, and said to his Wisconsin Badgers obsessed new fiancé, “even the box is Wisconsin red,” that I began to cry tears of complete euphoria. I still can’t believe how lucky I am to have had such a fairy tale engagement.

It’s beautiful, it’s timeless, it’s classic, and it was specially designed for me by my husband because he wanted me to have something that was unique and just for me. In the center, there is an over 1.5 karat princess cut diamond that is inset and surrounded by diamonds both on the top and on the side. I have a very small finger so my band is perfectly dainty but detailed with diamonds and mil-grain that give the ring some extra sparkle and a vintage look.

Finally, there is one more row of hidden diamonds lining the top of my finger where the bottom of my princess cut diamond meets the dainty band. I still wake up every morning, look at my ring, and can’t believe it’s mine! Justin and I are married now and my wedding band is the exact replica of my engagement ring’s band! The two rings fit perfectly together! 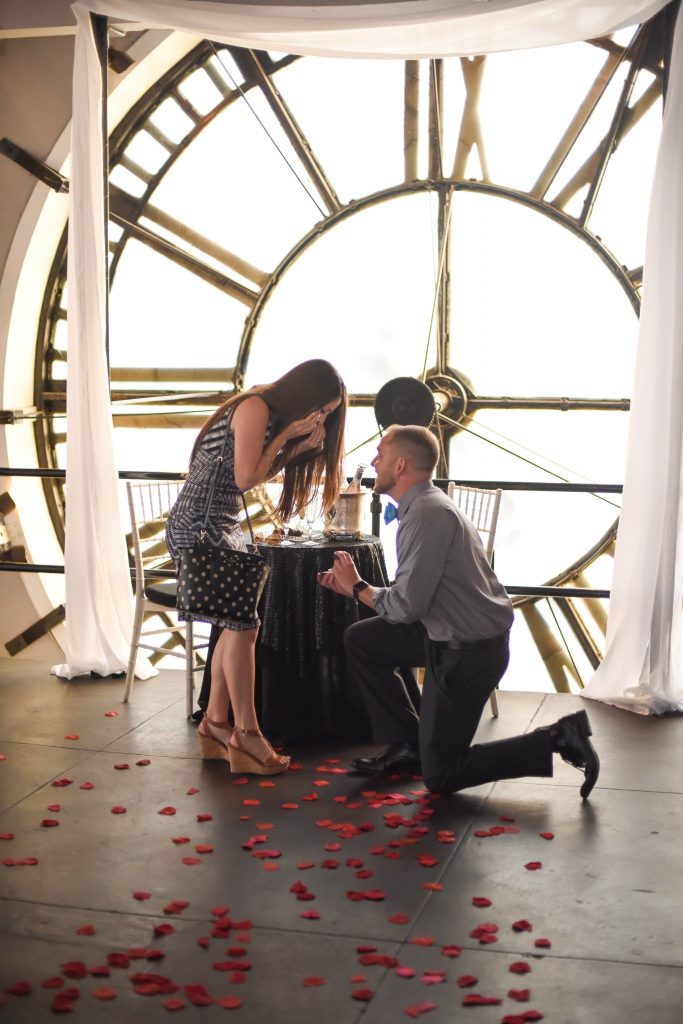 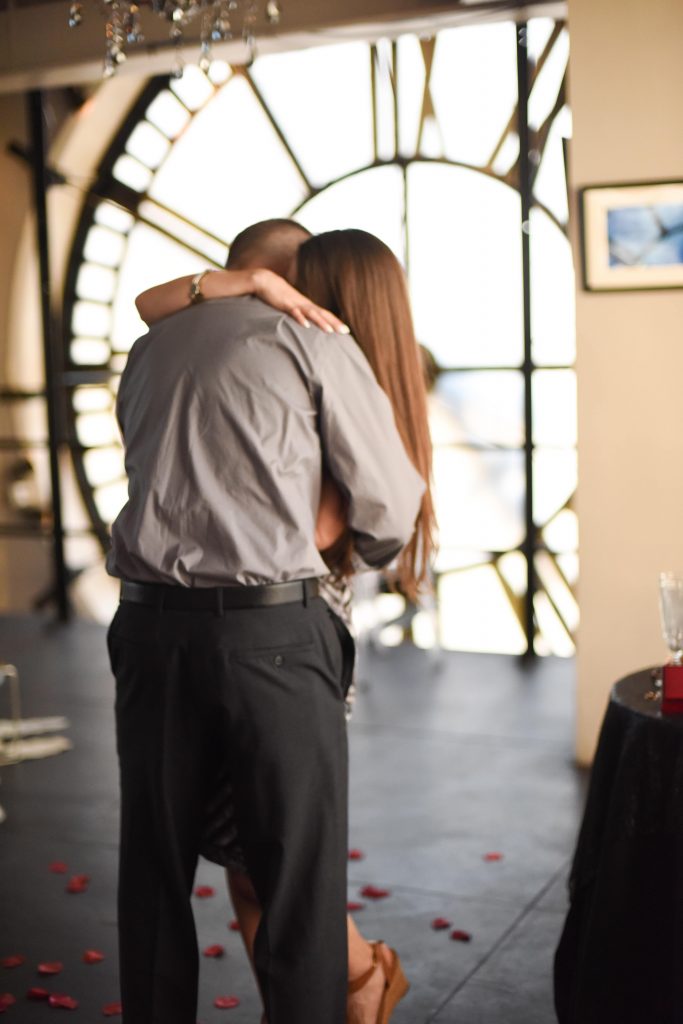 We met the first year of law school in Indiana. I initially saw her sitting in front of me in Student Orientation, then finally met her at a mutual friend’s house and we hit it off right away.

The time we went to the Popcorn Festival and I saw a high-school fundraiser going on for face-painting. I asked her if we should and she was immediately game for it. I had already fallen in love with her, but this made it certain to me that we would never be bored together.

I told her for a couple of weeks that I had a work dinner to attend and wanted her to join me to meet them for the first time. Meanwhile, I was planning on taking her to the clocktower in downtown Denver (right next to The Palm – the restaurant I told her the work dinner would be held).

That night, I cooked the first meal I ever prepared for her, Fettuccine Chicken Alfredo. Once we were finished eating, I ordered us an Uber Black, with the ring box in my right pocket. It was so difficult to keep my right side facing away from Kim at all times so she could not see that massive box-like object protruding from my pocket. I kept my sweaty, right palm over my pocket the entire ride.

We arrived at the clocktower and I asked Kim if she wanted to see if we could try and go to the top of the tower to look around (I had arranged for a set-up at the top). We went to the top of the clocktower, where rose petals lined the aisle to a table with champagne and chocolate-covered strawberries. When we got to the table, with Sinatra playing in the background, I got down on a knee and told Kim how I could not picture my life or going through this journey without her and asked her to marry me. She said yes immediately!

We then celebrated with champagne and strawberries and took some pictures with the photographer that I hired. After taking some photos, we retreated back to the table to take it all in and enjoy each other’s company as a newly-engaged couple.

I still remember coming back to the table (about 2 hours after arriving at the tower), and as we were eating strawberries and drinking champagne, Kim turned to me and asked “So are we still going to dinner with your colleagues?” I laughed hysterically and replied “This is why I love you.”

The only thing I knew for certain when I began designing my ring was that I needed a Princess cut. I only had a vague idea of a design when I began. The Diamond Reserve helped me not only choose the perfect diamond, but also helped me envision a setting that was timeless and fit my wife’s style. I could not have asked for better direction and assistance throughout the entire process. I loved the fact that I received a CAD image of the ring design!

I must have changed my design around 10-12 times but Kaeleigh was always so patient and helpful. I loved working with The Diamond Reserve so much that we came back for the creation of both of our wedding bands. Her wedding band perfectly matched her engagement ring, whereas mine is 18k white gold with two rows of black diamonds around it. I’m very excited to wear this ring every day! 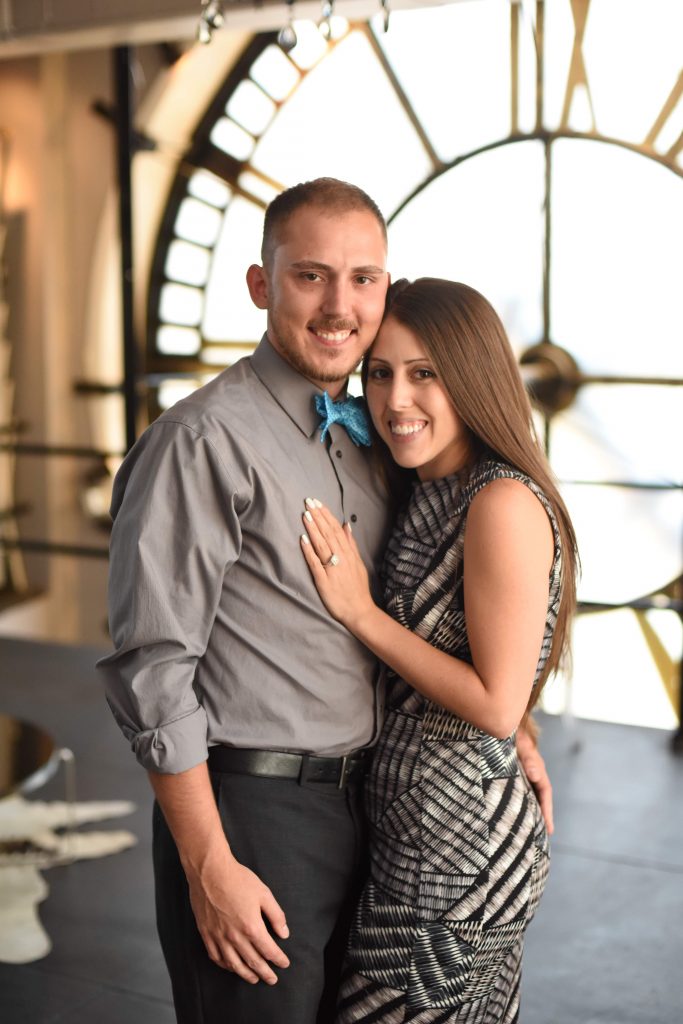 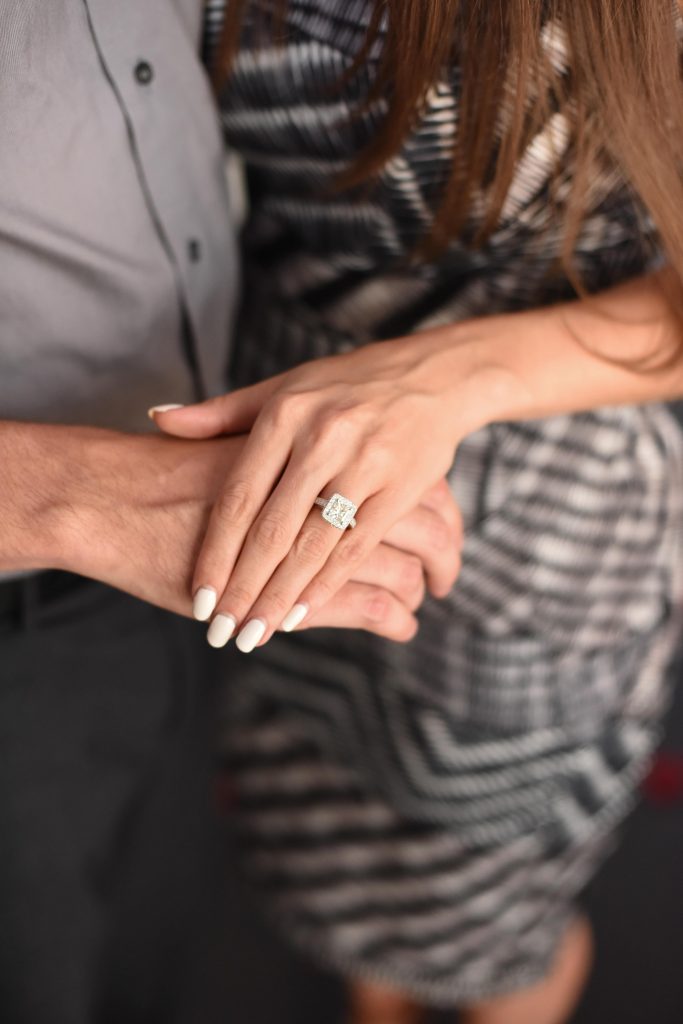