A normal day turns into a moment that would change their lives forever in this installment of our Couple’s blog!

How did you two meet?

We were set up on a blind date! We ended up spending the whole weekend together in Aspen at his fraternity formal. It was the craziest thing I said yes to!

When did you know Jon was the one?

I went through a hard time about a year after we started dating and Jon never wavered and was my rock through the next few months. He never treated me differently based on my emotions or my pain and loved me so hard through it!

We had flown to Tulsa to be with his family for Christmas and after much insisting on his part that it was NOT happening until after the new year I had no idea. On December 23rd after a long day of boating we came back to his parent’s house and I was ready for a nap. He was so insistent that we take our dog for a walk and I was not having it. After lots of moaning and groaning I threw my hair up in a messy bun and said OK.

We walked to a park down the road that is one of my favorite spots in Tulsa. He was acting so strange and my wheels started to turn and I knew it was happening! We both were so nervous but giddy and it was the best day ever. His parents and family were waiting with champagne when we got back! 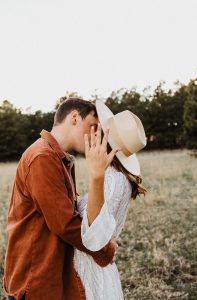 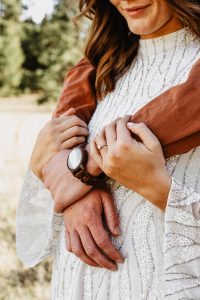 Tell us about the ring!

Jon and I were lucky enough to create my ring together with Kaeleigh’s help! I knew I wanted a solitaire but once I saw the gold twisted band a round just fit perfectly! It is timeless and intricate and I am so happy we went with the Diamond Reserve!